The Galapagos Archipelago consists of 19 Islands, which are all located in the Pacific Ocean, about 1.000 kilometers away from the South American coast. On the Galapagos and the surrounding marine reserve, you can find plenty of special and unique animal species. This is due to the unique natural processes, such as the ongoing seismic and volcanic activity and the extremely isolated location of the islands. Together, this resulted in the development of extraordinary animal life on the Galapagos. For this reason, this marine reserve has been called a ‘living museum and showcase of evolution’. In 1835 Charles Darwin visited the Galapagos, which contributed to the development of his theory of evolution.

Every month has its own perks at the Galapagos. With this calendar you can see the highlights per month: 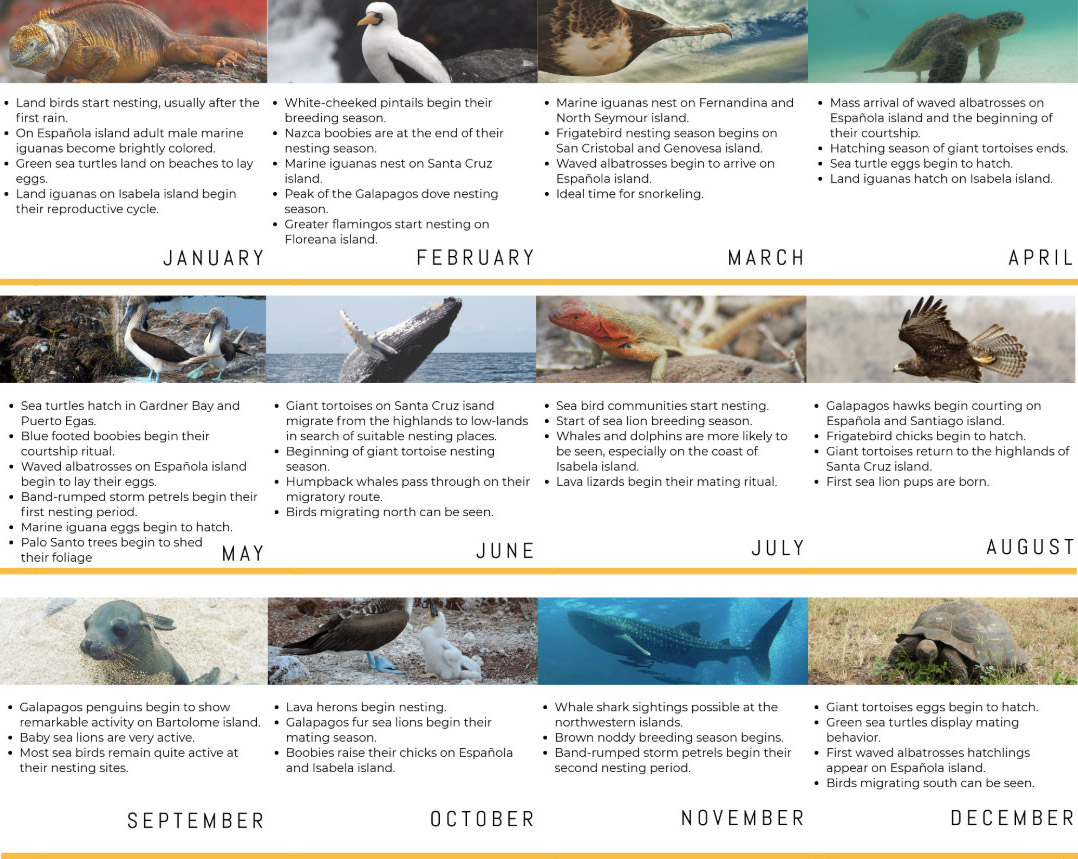 GALAPAGOS ISLANDS TOURS: BY CRUISE OR BY LAND

With an island hopping/land-based tour you stay on the three main islands on the Galapagos Archipelago; Santa Cruz, San Cristobal, and Isabela. Here you go on (guided) excursions during the day and at night you stay at a comfortable hotel. Excursions are for example; snorkeling, diving, hiking (volcanoes), visiting interpretation centers, and visiting historical sites. Transportation by water and overland is included. Please visit this page to see all the different types of island hopping tours.

If you like diving you can find the best diving packages. The Galapagos Islands is one of the best spots in the world for diving, stated by the PADI community. You can even take your whole PADI course at the Galapagos Islands. Check out one of our best-selling diving tours: 7 Day Galapagos Diving.

At Rebecca Adventure Travel, you can find the best Galapagos Islands cruise tours. From tourist class to tourist superior, luxe, and first-class, you find all the boats for the best price. The main advantage of taking a cruise is that you travel at night and during the day you have the entire day to explore the most remote spots of the Galapagos Archipelago. A disadvantage is the limited space that you have on board (especially tourist and tourist superior class boats). The boats have a limited number of cabins (usually around 10). The cruises take from 4 up to 15 days and the starting points are either at Baltra or at San Cristobal airport.

Check out our last-minute cruise deals on the Galapagos Islands. Please contact us for more information and include the date range, preferred service level, and the number of passengers.

Pros of Cruise based tours

WHAT TO SEE IN THE GALAPAGOS ISLANDS

INTRODUCTION OF THE SPECIES

According to several scientists, the Galapagos Islands were never connected to the mainland. Therefore, the ancestors of every plant and animal species on the islands come from elsewhere. Regardless of being separate thousand kilometers from the mainland, most of its species were originally from North, Central, and South America and the Caribbean. Land birds and California Sea lions arrived from North America, pink flamingos and Darwin’s finches from the Caribbean. Whereas, land iguanas, pelicans, cormorants, and blue-footed boobies arrived from South America. As a result of the Humboldt Current fur sea lions and penguins were able to reach the Galapagos Islands as well. Animals that were not suitable to the ocean, think of land mammals, reached the islands later by passage provided by the humans.

Around the year 1600’s humans started visiting the island bringing plants and animals that otherwise never would have reached the Galapagos. Later around the 1800s people who settled at the Galapagos brought animals such as horses, cattle, donkeys, goats, pigs, dogs, and cats. Present-day only two of the nineteen islands remained untouched by introduced mammals. However, the introduction of new animals is still happening. 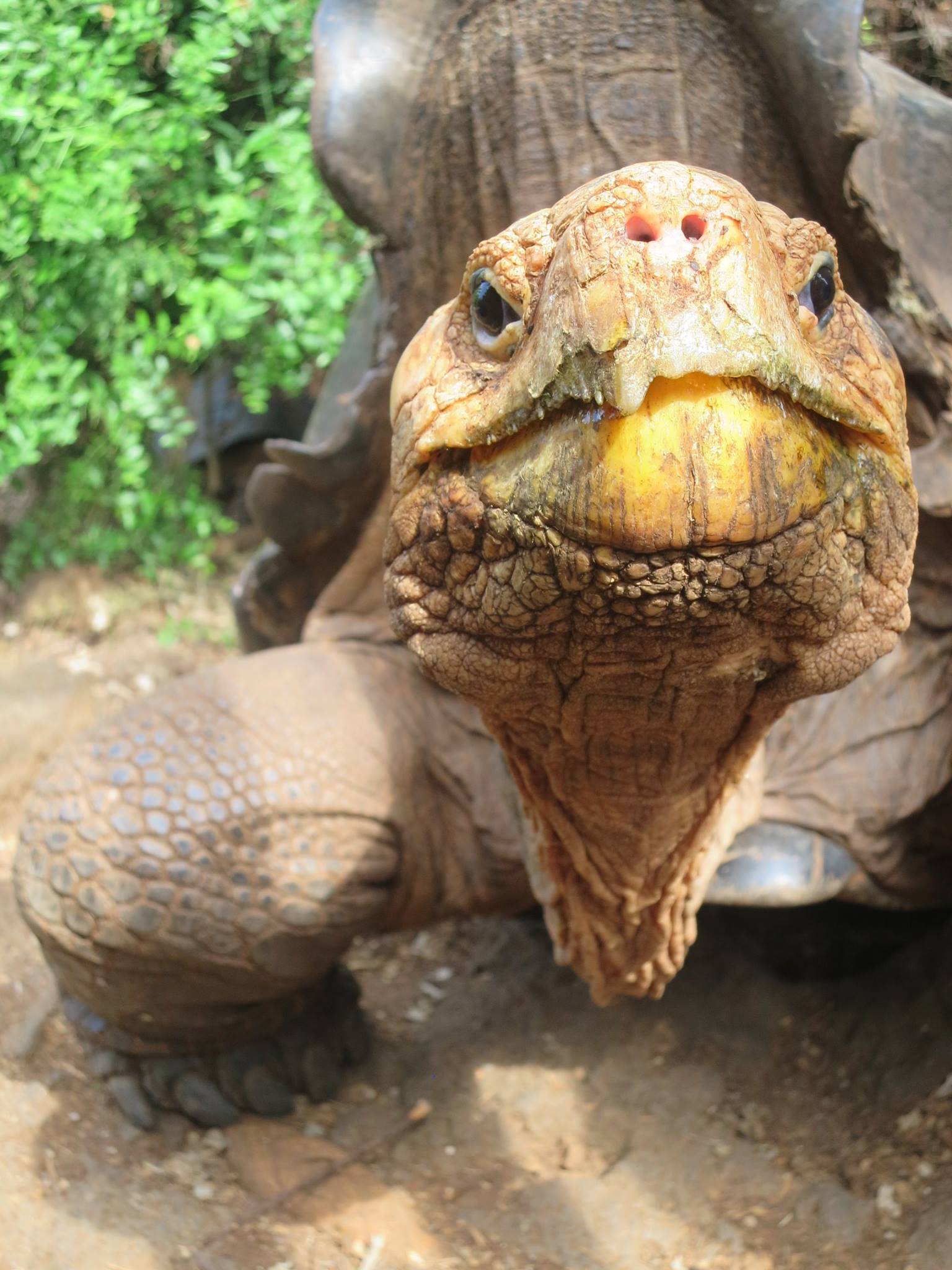 On the Galapagos Islands, three land iguanas can be found. These are the well-known yellow-colored iguanas called Conolophus subcristatus (Isabela Island, Fernandina Island, Santa Cruz Island, and South Plaza Island), Conolophus pallidus (Santa Fe Island) and the Conolophus Marthae (Wolf Volcano at the Northern end of Isabela Island). They live in drier places on the islands. Land iguanas can become more than 1 meter long and can weigh above 13 kilograms. They reach maturity when they are between 8 and 15 years. 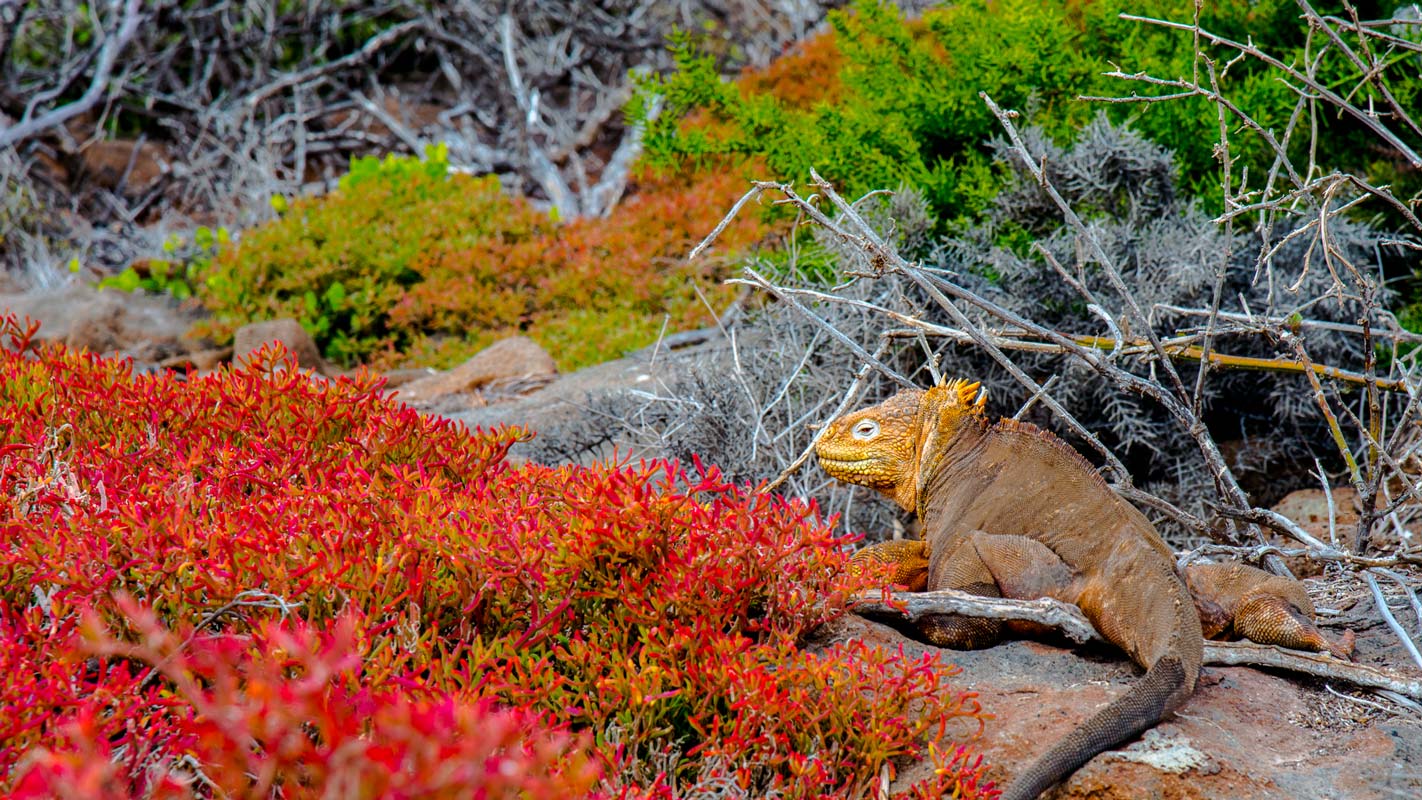 On every shore zone of the Galapagos Islands, you will see marine iguanas. At the archipelago there are seven marine iguanas, Albermalensis (Isabela Island, Cristatus (Fernandina Island), Hassi (Santa Cruz Island), Mertensi (San Cristobal Island and Santiago Island), Nanus (Tower Island), Sielmanni (Pinta Island) and Venustissimus (Hood Island). The marine iguanas on the Galapagos are large and dark with variable coloration. You can distinguish the marine iguanas from the land iguanas by their flat and square nose and flatter tail. Their flatter nose is an adaption to make it easier to eat algae. Whereas their flatter tail helps them to swim. They feed themselves by marine algae obtained from the splash zone or by diving near the shore. Interestingly, they can spend up to 1 hour underwater. Marine iguanas take up to eight years to reach maturity. 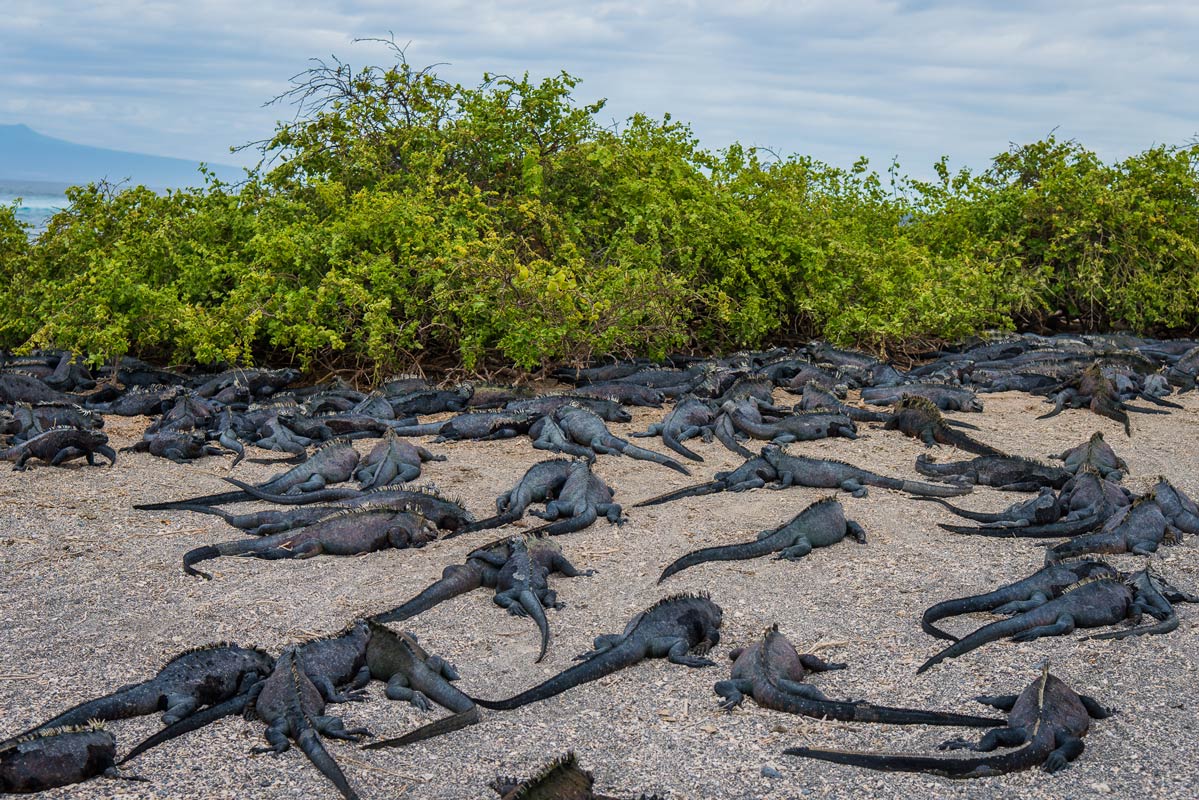 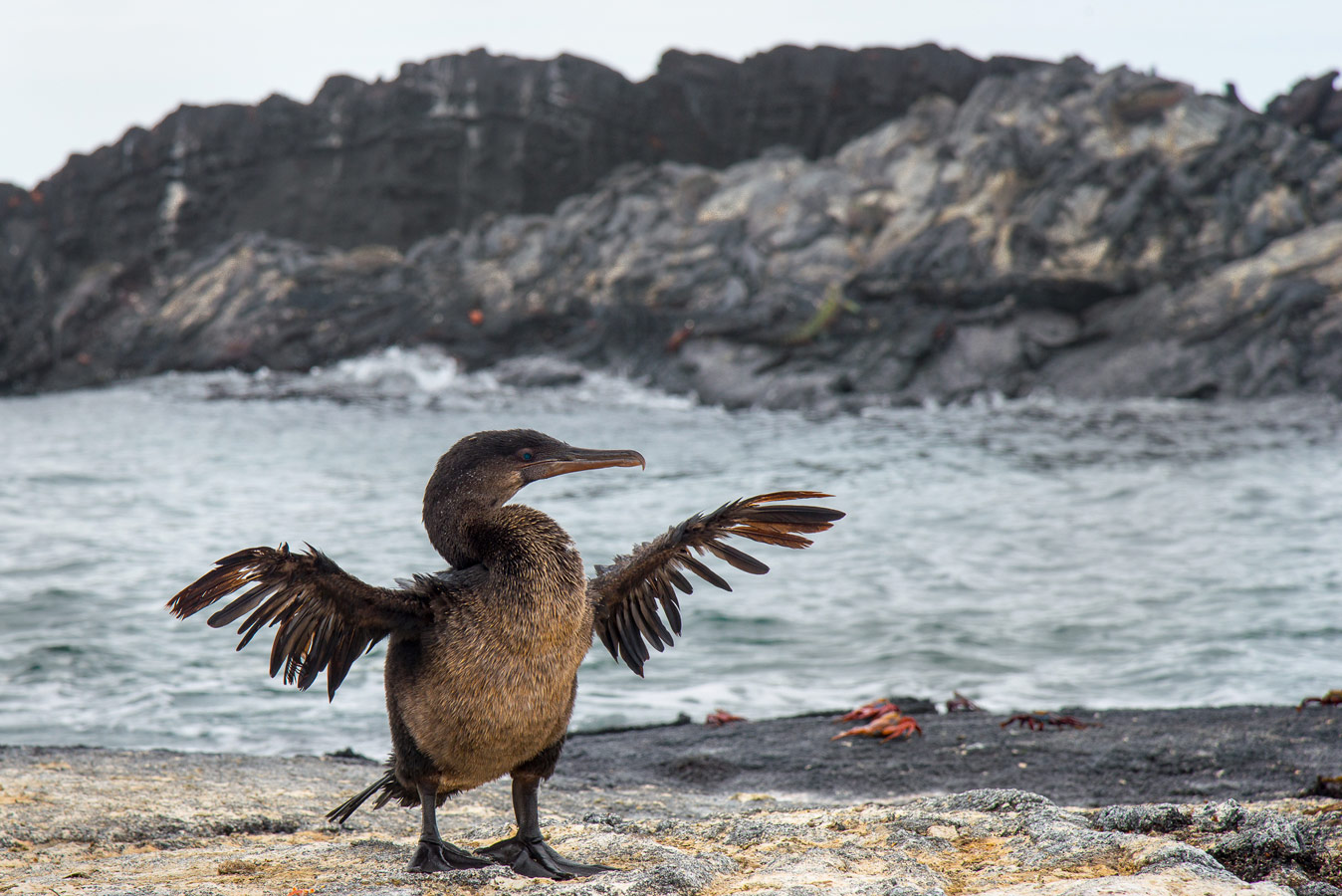 On the Galapagos Archipelago, you can spot 14 different species of Darwin’s Finches. As the name indicates, they are called after the biologist Charles Darwin. The Finches are fearless and very noisy. All of Darwin’s Finches have a similar size of a sparrow and they have a similar appearance with grey, brown, black, or olive feathers. Even though the 14 different Finches have the same appearance they do differ in size and habitat. The 14 different species of Darwin Finches on the island vary in what they eat. Some eat seeds whereas the others eat insects. You can find Darwin’s Finches throughout the Galapagos Archipelago. 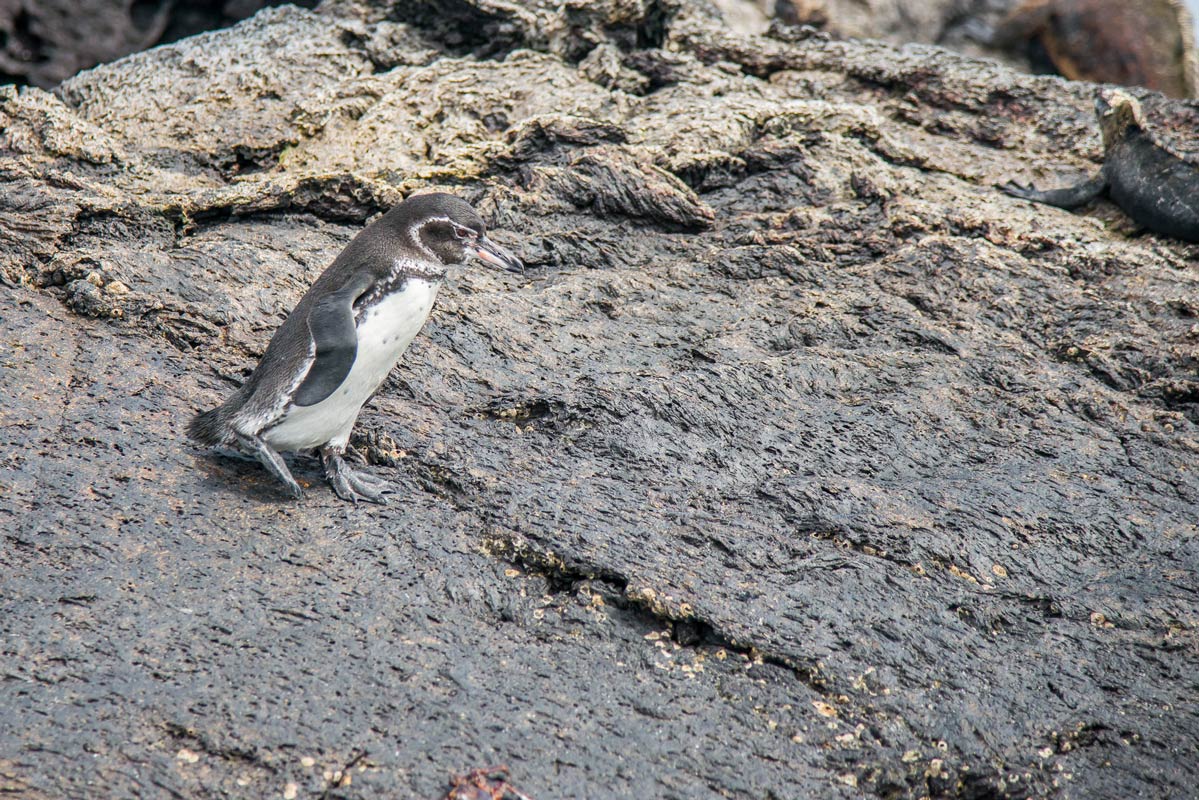 The Galapagos fur seal looks with its short, pointed, muzzle, small, button-like nose, and fairly large eyes like his land carnivores ancestor. The coat of the Galapagos fur seal varies from dark brown to dark grey with light-tipped, longer guard hairs that give a grizzled appearance. Mostly the fur seals rest on the rocky shores of the Galapagos. When doing so six to ten Galapagos fur seals can occupy a space of 100 square meters. They group together mostly because of the scarcity of suitable rocks, as well for the benefit of making the females less vulnerable. The Galapagos fur seal is endemic to this Archipelago, where you can find them mostly on the island of Santa Cruz, but also on the western island, like Fernandina and Isabela Island. 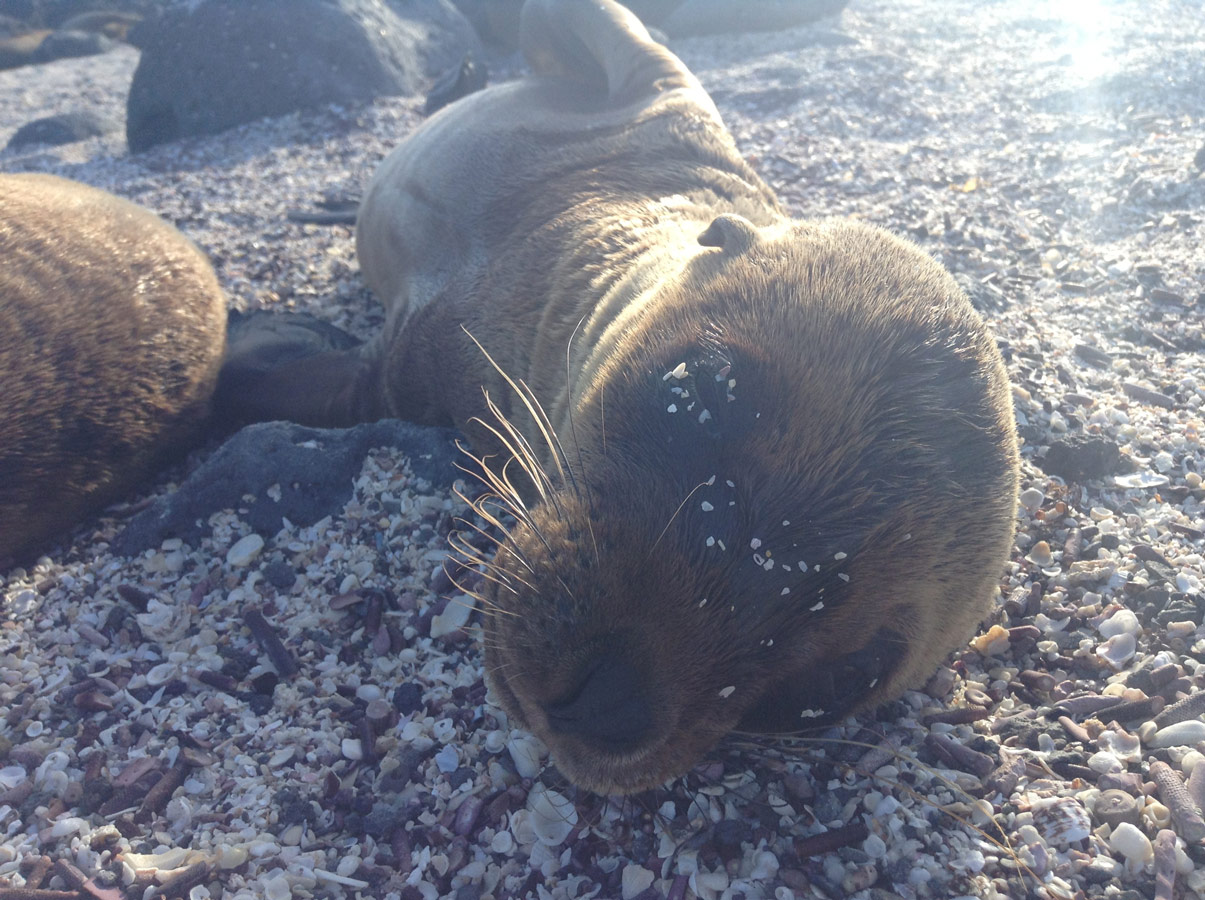 The blue-footed booby is one of the famous animals in the Galapagos. The name ‘Booby’ comes from the Spanish word bobo meaning fool. This refers to the fact that the blue-footed boobies are a bit clumsy on land. This seabird is a large, comical-looking, and recognizable by its blue feet. Even though male and female boobies look similar there are some differences. Females can be distinguished by their dark inner iris in the eye, making their pupils larger. In addition, the females tend to be a bit larger than the male but has a shorter tail. You can spot blue-footed boobies at the Galapagos at North Seymour, Isabela, Genovesa, and especially at Floreana Island. 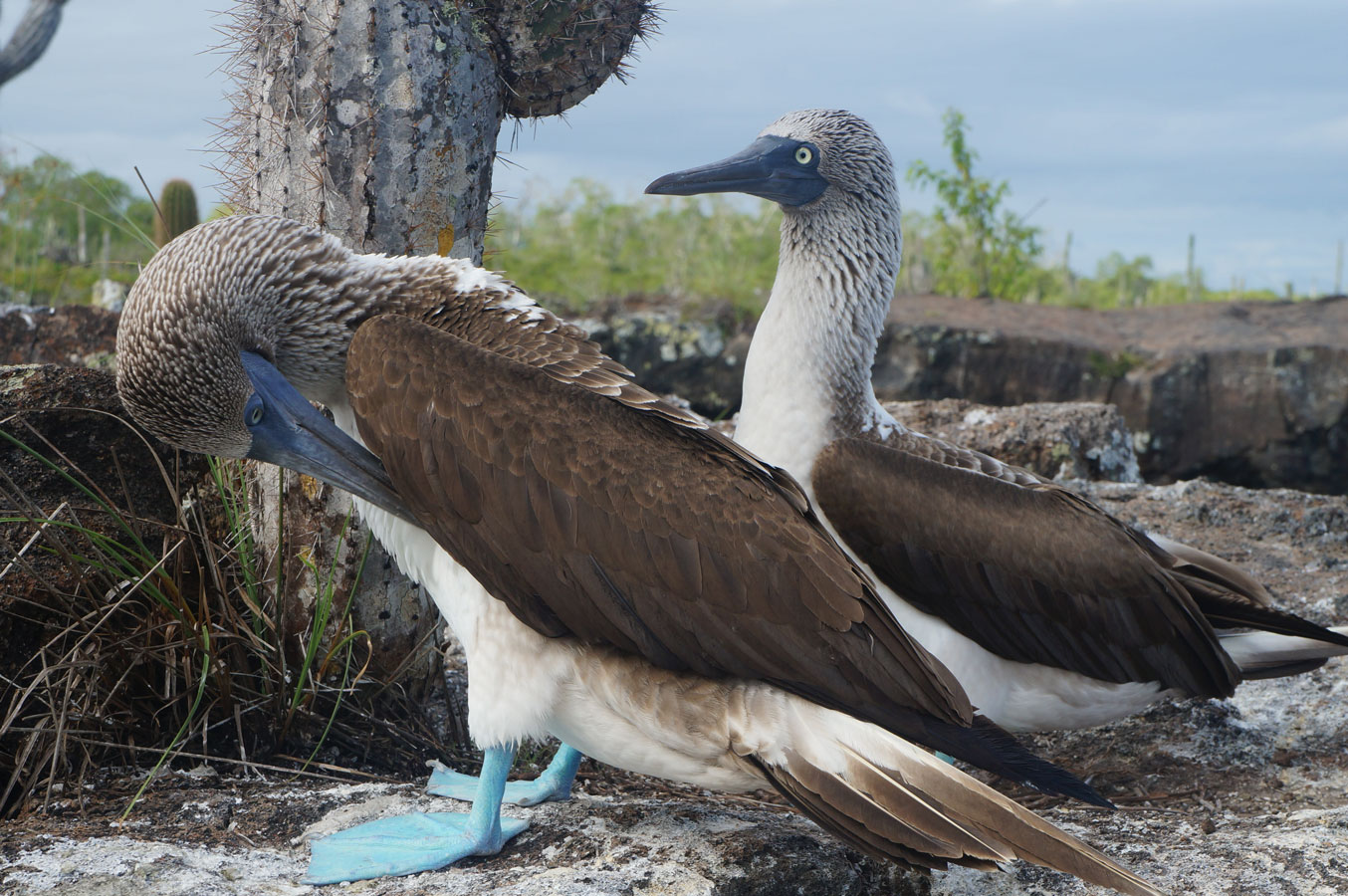 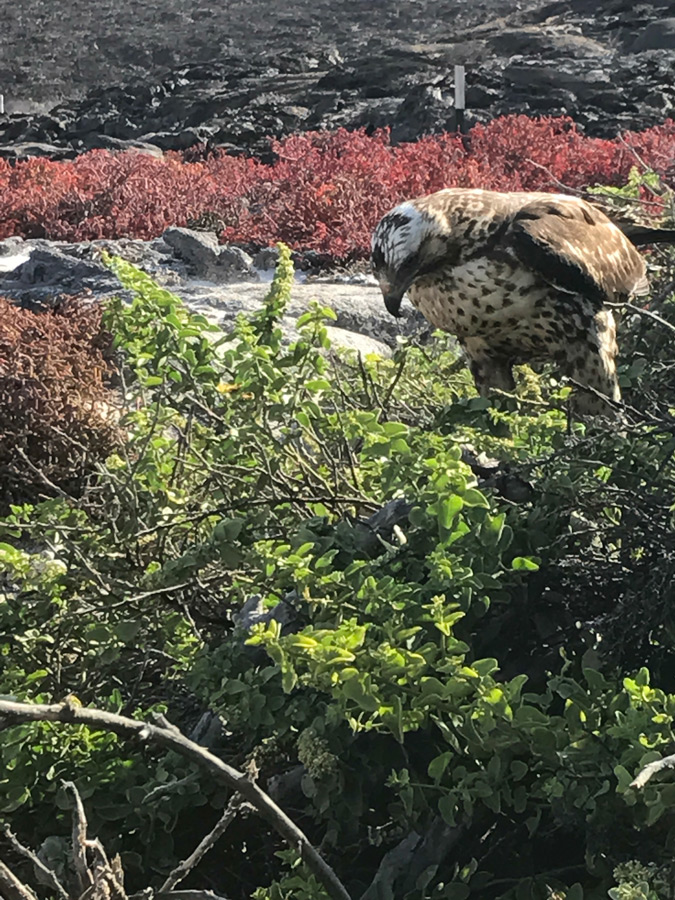 As one of the most abundant reptiles throughout the Galapagos Islands. They look a lot like the smaller version of the iguanas. You can find the lava lizards normally in large groups atop lava, where they got their name from. Males lava lizards tend to be brighter colors with yellow specks or gold stripes. Whereas females have a red throat or head. In addition, males are larger than females and have rougher skin. The lava lizards can be found on every island except Genovesa, Darwin, and Wolf. 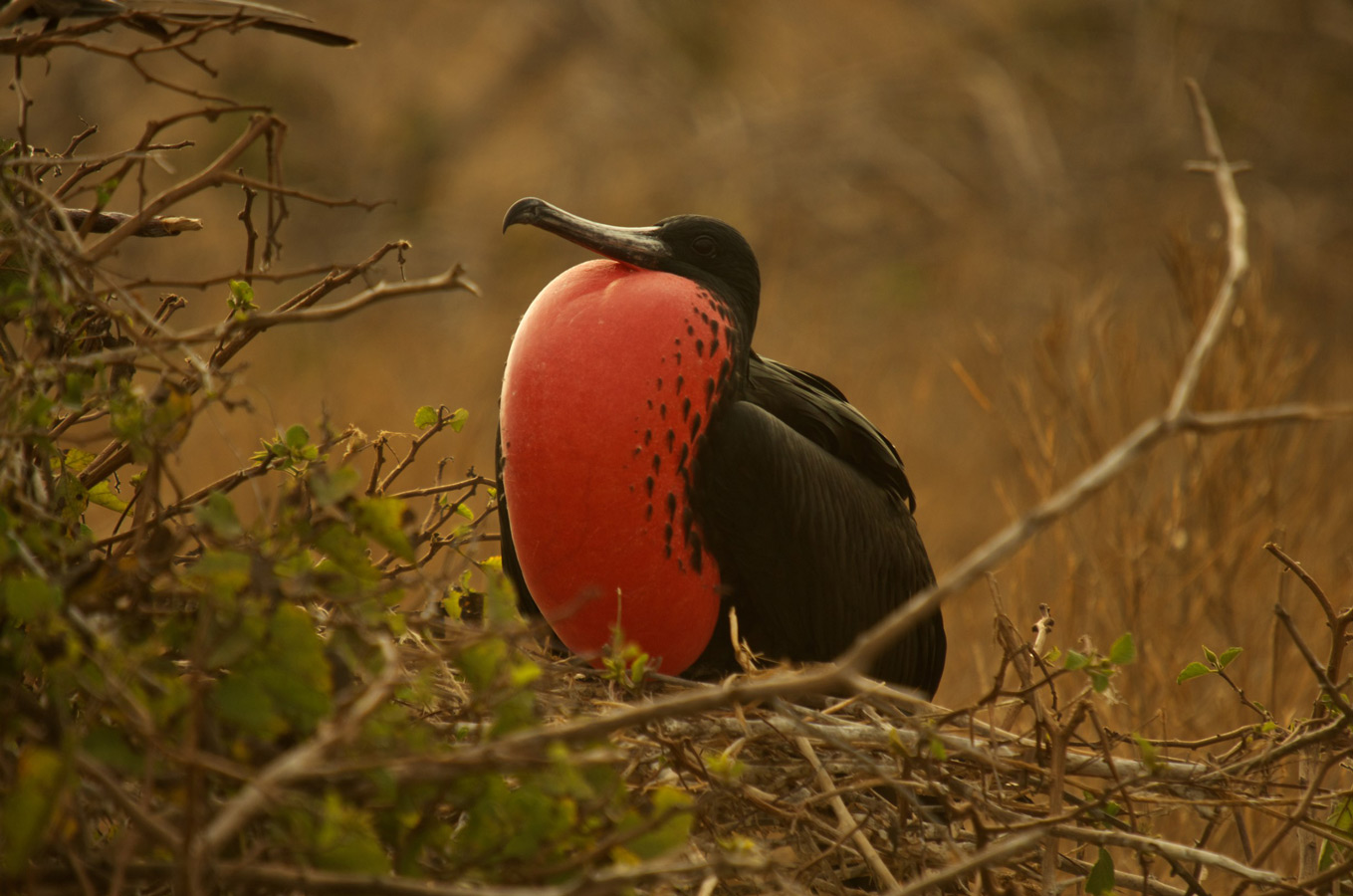 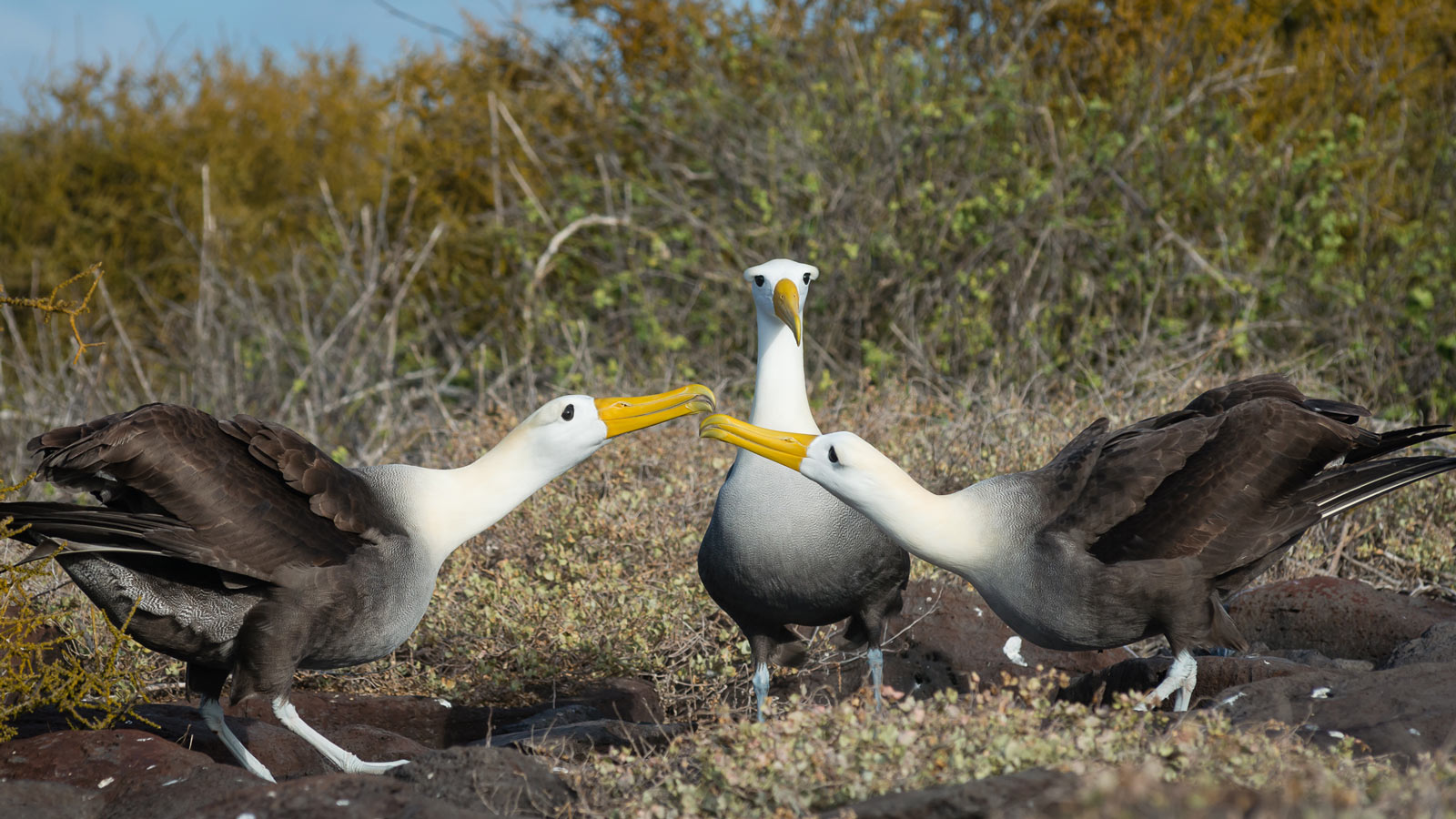 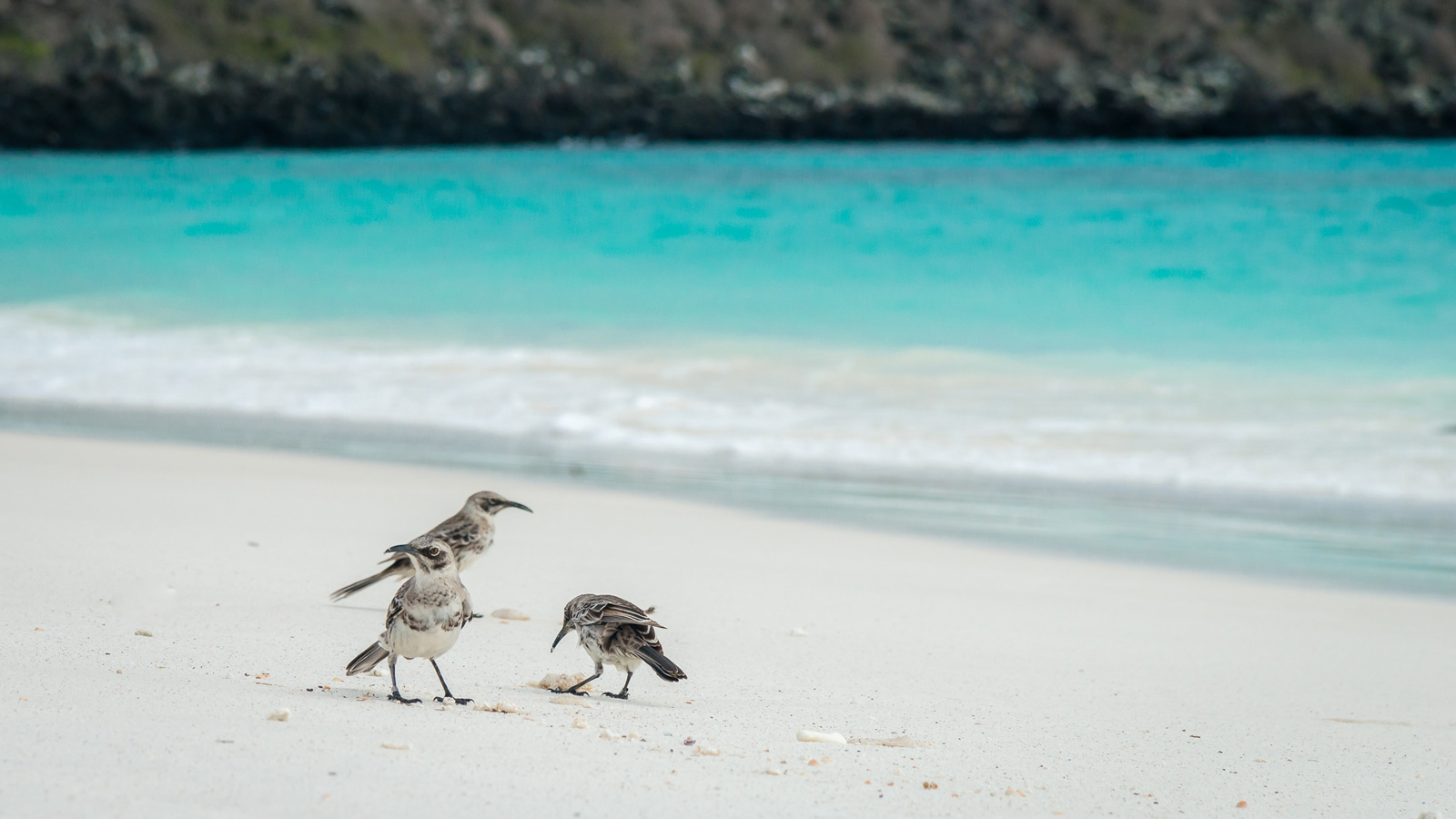