In May, Indy (marketing inter) went to Yasuni National Park in the Ecuadorian Amazon with Rebecca Adventure Travel. “There is so much to do and see in Yasuni. Also, all the stories about this part of the Amazon are amazing and based on true stories!”. Here you can read her experience about her adventure in Yasuni! 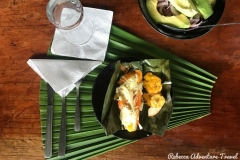 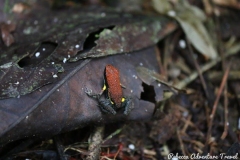 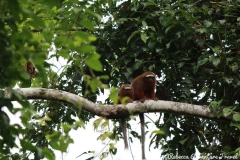 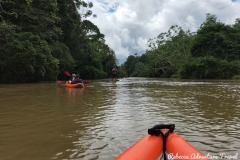 We arrived at Coca in the early morning. We drove together with our guide all the way from Quito. It was a long night drive of around 8 hours. The other guests arrived by plane around 7:30 AM, and we picked them up from the airport in Coca. We were 6 in total which was very nice because it was just a small group.

After a 2 hour drive, we passed the entrance of the river where we would start this adventurous journey in Yasuni National Park. The other guests were experienced kayakers. But despite having no experience, it went very well. We kayaked to the first campsite for about 4 hours. The river was very high which also made it a bit easier.

We spent the first night on a primitive campsite. There were 4 small tents, a shower which consisted of a rain barrel, and a toilet which was just a hole in the ground. It was very primitive, but it was part of experiencing the Amazon to the fullest! TIP: There are 2 ways to get to Coca, by plane, and by bus. You can take an overnight bus which is the cheaper option but I would recommend the flight as the bus is a long drive.

We woke up with the daylight and had breakfast on the other side of the river, where we had our dinner the previous night as well. This place was the house of one of the people from the community. It was nice seeing it with daylight because now you could really appreciate how the house was built, and how the surrounding nature looked. After breakfast, we went kayaking to the second campsite. Kayaking in Yasuni National Park is an experience in itself, and you will find yourself surrounded by pristine nature!

This took around 3 to 4 hours, and we saw some monkeys and beautiful birds on the way there. When we arrived at the campsite, we were welcomed with freshly made juice and platano chips. Freshly made juice is an Ecuadorian tradition to have every day, along with other delicious food.

The campsite was very nice, especially compared to the first primitive campsite. This campsite is more considered glamping. There was a wooden bridge throughout the whole camp which led to the tents, bathrooms, and dining place. The tents were under a palapa hut on a wooden platform, 1 or 2 meters above the ground. They do this basically for when the river gets high but also for the animals.

Later in the afternoon, we did a hike on the other side of the river. During the hike, the local guide explained a lot about medicinal plants and other things we came across. It was not a heavy hike, but it almost took us 2 hours because we stopped a lot on the way. The highlight of the hike, for me, was a little frog that we saw. It was a small frog with orange, yellow, black and blue colors. This frog was dangerous as its poison could kill people when it enters the blood vessels. Besides that, it was just a beautiful little frog, and the hike was very interesting with all the information we got! We started this day early and went kayaking in the early morning to see the mist and fog over the river and forest. We also hoped to see some wildlife like tapirs washing in the river, but unfortunately, we did not see any. The river was 3 meters higher than normal because of the heavy rainfall of the past couple of days, and the sandbanks were underwater.

During the kayaking, we saw 3 different species of monkeys and lots of birds. Before we arrived at the Anaconda Lagoon, we saw that the road was blocked. The local guide went on his paddleboard in front of the kayaks with a machete to clear the way to the lake. After a while, we arrived at the Anaconda Lagoon and saw beautiful yellow and blue macaws (parrots) flying above us. We paddled around for an hour in the lagoon but unfortunately, we did not see any anacondas or black caimans. We went back with a motorized canoe to the campsite because it was upstream, and too hard to kayak.

In the afternoon, we went on a small fishing trip. The worst time to fish is when it is raining, the guide told us, and 5 minutes after arriving at the fishing spot, it started raining. We tried to catch some piranhas, but we did not succeed and moved to another spot. In the end, we could not catch anything because of the bad weather! After breakfast, we went right away to the Parrot Clay Lick. The guide told us the parrots come down around 9:00 AM in the morning. It was supposed to be a 20-minute drive with the motorized canoe, but because the river got lower there were a lot of obstacles on the way.

When we arrived at the clay lick, it was raining, and when it rains, the parrots don’t come down to the clay lick. Also, there was a hawk around which is considered a predator. That is another reason why they did not come down.

Because we were waiting for a while, the guides came with some ‘Achiote’ which means the lipstick plant in Spanish. They painted our faces with the color of this food. Besides that, it is used as a spice for cooking or food coloring and it keeps away the mosquitos. They also made headbands of palm tree leaves.

Then, we visited the local school in the community. On the way there, we saw 2 children on a canoe on the side of the river looking if they caught some fish in their fishing nets. The first thing the guide asked the canoe driver and local guide was ‘Why are they not in school?’. Apparently, they had the whole week off because the 2 teachers had classes themselves in Coca. So when we arrived at the school, it was empty, but the canoe driver and local guide told us some interesting information about the children and the school system.

In the afternoon, we had some free time. One of the local guides taught us how they used to hunt with blowpipes. It was a fun cultural activity. We rested for a while, and then, we went on a night hike before dinner time. The trail was next to the campsite and it was an easy and accessible path. We saw 3 different kinds of frogs, also spiders, beetles, centipedes, and other insects. The possibilities to be active in the Amazon are great, and Rebecca Adventure Travel did its best to secure a safe experience.

After the hike, the table was beautifully set for our last dinner. The food during the whole 5 days was amazing. As a vegetarian, often the choice is very limited. But every day, I had something different, it was delicious! This was the last day of this amazing adventure. We took the canoe back to the place where we entered the river 4 days ago. As we really wanted to experience the Parrot Clay Lick, we wanted to go one last time, but it was raining again, so there was a small chance to see the parrots coming down. It was a once-in-a-lifetime experience. Even though the showers were not that bad in my trip, it was nice to take a hot shower at home and get a good night of sleep after this journey.

Wish to experience this amazing adventure? Read more about the adventure here, or take a look at our other Amazon adventures. If you have any questions don’t hesitate to contact us! Take a look at some of our popular Amazon Tours: